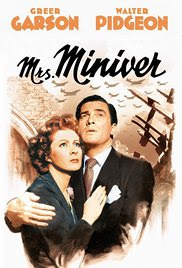 Mrs. Miniver tells the story of life in the U.K. 1939-1941 experienced, as the opening crawl explains, by an “average English middle class family”—which just happens to be able to afford servants and a spacious residence whose lawn extends to a dock on the Thames River. Shot in Hollywood starting on November 11, 1941, and released in June 1942, the MGM film became that year’s highest grossing picture and garnered six Academy awards, including Best Picture, Best Director (William Wyler), Best Actress (Greer Garson in the title role), and Best Supporting Actress (Teresa Wright). Its appeal has endured; the American Film Institute ranks the film 40th on its list of “America’s most inspiring movies.”

Based on Jan Struther’s 1940 bestseller Mrs. Miniver, a compendium of anecdotal British newspaper columns, the movie has only tenuous ties to the book, whose arc barely reaches the war’s outbreak. Working with six screenwriters, director Wyler extended Struther’s timeline to incorporate Dunkirk and the Battle of Britain.

At the outset, Kay Miniver (Garson), husband Clem (Walter Pidgeon), and eldest son Vin (Richard Ney) are—as that crawl puts it—among England’s “happy, careless people . . . in that happy, easy-going England that was so soon to be fighting desperately for her way of life and for life itself.” Even when war breaks out the Minivers’ comfortable lives change little, though Vin does become an RAF fighter pilot. Reality intrudes only when Clem sails his motorboat to join a  flotilla that—offscreen—rescues the British army from Dunkirk.

While Clem is busy across the Channel, a downed German pilot (Helmut Dantine) finds his way into the Miniver home. The screenwriters, responding to Americans’ increasing admiration for England, reworked this sequence several times. In a draft predating Pearl Harbor, Clem is present; the German, wounded and frightened, yields to Kay’s entreaty to give himself up and get medical attention. But in a post-December 7 version, Clem is absent, the German has a pistol, and Kay clearly in peril. And the finished film portrays the flyer as a fanatic. He holds Kay at gunpoint, demanding food he wolfs down like a wild animal before fainting from blood loss. Barely rattled, she takes away the pistol and phones the police. When the pilot revives, too weak to be dangerous, Kay sympathetically tends him. He’ll soon be “wonderfully looked after in a hospital,” she says. “The war won’t last forever.”
Mrs. Miniver’s trademark benevolence enrages the German. “We will bomb your cities,” he storms. “Rotterdam we destroy in two hours. Thirty thousand in two hours. And we will do the same here!” This is unspeakably rude (as well as inaccurate, since the Rotterdam bombings claimed only 884 people) and Mrs. Miniver slaps the brute. No sooner have the bobbies collected their prisoner than Clem chugs up to the Miniver dock. His Dunkirk circuit has battered his boat. Nonetheless he behaves much as a man just back from a particularly grueling business trip. Clem greets his family, falls asleep, and upon waking ten hours later asks if news of the Dunkirk evacuation is in the papers. It is, Kay says.

“Thank heavens,” Clem replies. “I shan’t have to tell you about it.” And he doesn’t.

Neither does Mrs. Miniver mention her adventure, until the household cook interrupts to announce that she has no ham for Mr. Miniver’s breakfast, explaining to Mrs. Miniver: “You gave it all to that German pilot.”  Not a problem, Mrs. Miniver replies; Mr. Miniver likes bacon, too. Naturally Clem asks what German pilot, and in a playful scene Kay treats the episode in an elaborately coy manner that is utterly typical of the film.

Come what may, the Minivers’ lives remain idyllic. Yes, there are air raids, but the family hunkers in its Anderson shelter and Clem talks about how much he likes Alice in Wonderland. Vin weds the lovely Carol Beldon (Teresa Wright), adding another Mrs. Miniver to the household—and not incidentally a status dimension to the film. Carol’s grandmother is Lady Beldon (Dame May Whitty), a local aristocrat who frequently sniffs about the “middle classes” in a successful bid by the filmmakers to make the unpretentious but well-to-do Minivers more sympathetic to egalitarian American moviegoers. In the same vein, the film generally conveys that in wartime England class distinctions do not matter. Even Lady Beldon unbends; at the annual village floral competition—which by tradition she always wins—the grand dame permits a kindly stationmaster’s entry, dubbed the “Mrs. Miniver rose,” to claim first prize.


Tragedy invades only near the conclusion. Just hours after the floral show an air raid claims several villagers, including the stationmaster and Vin’s new bride, Carol. At a memorial service in a heavily damaged church, the Vicar (Henry Wilcoxon) delivers a powerful sermon. In the October 1941 shooting script, his homily was the 91st Psalm, which presents the Almighty as a refuge and a fortress. But after Pearl Harbor, a stirring peroration was inserted just after the scripture passage, composed by Wyler and Wilcoxon just hours before the scene was filmed. In it, the Vicar laments the dead innocents, declaring that theirs is a war in which everyone must share the burden of freedom’s struggle against tyranny. “This is the people’s war,” he concludes. “It is our war. We are the fighters. Fight it, then! Fight it with all that is in us!  And may God defend the right.” The camera holds on Mr. and Mrs. Miniver, resolute and dry-eyed, as the congregation sings “Onward, Christian Soldiers.” It then pans upward toward a gaping hole in the church roof.  The camera then dollies toward it, enlarging the hole so that the audience gets the full effect when a squadron of Spitfires passes overhead, flying toward the foe.


The film works because strong performances—especially Garson’s—redeem preposterous characters, and the Vicar’s concluding oration has enduring power. However, Mrs. Miniver presents war more as a case of dreadful manners than as something truly fearful: a sanitized way to promote American solidarity with Britain without hinting at how horrible that “people’s war” would be.
Posted by Mark Grimsley at 5:38 AM