Origins:  Current Events in Historical Perspective, is a publication of the Ohio State University Department of History.  Here's the intro to the most recent piece, with a link to the complete article:

By Greg Hope.  Greg is a U.S. Army captain who is doing his graduate work in preparation for his next assignment, as a military history instructor at West Point.

The Normandy Invasion (June 6, 1944) was the supreme joint effort of the Western Allies in Europe in World War II and remains today one of the best known campaigns of the war.

Code named Operation Overlord, it was a battle marked by its courage, meticulous planning and logistics, and audacious amphibious approach. It was also in many ways inevitable. Following Germany’s conquest of France in 1940 and declaration of war on the United States in 1941, a confrontation somewhere on the shores of Northern Europe became a waiting game, with only the date and location left to be answered.
On D-Day, over 125,000 British, American, and Canadian soldiers supported by more than five thousand ships and thirteen thousand aircraft landed in Normandy on five separate beaches in order to carve out a sixty-mile wide bridgehead. This foothold would be the launching point from which the liberation of France and Western Europe would proceed. Opposed by German units in strong defensive positions, the Allies suffered more than twelve thousand casualties on the first day of the invasion.

This year we mark the 70th Anniversary of Overlord. To commemorate the battle, Origins offers ten of the most important things to know about the invasion.


Full article
Posted by Mark Grimsley at 11:33 AM No comments:

Casablanca and the Politics of Sacrifice 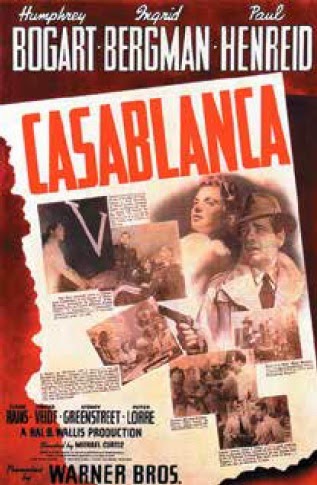 The first time I saw Casablanca I was twenty years old, with a date on my arm and hope in my heart.  Unsurprisingly, I watched it through the lens of romance.  So too, for at least the first five viewings, should anyone watch this most beloved of American films.  The journey of its central character, Rick Blaine (Humphrey Bogart), from a deep bitterness about love at the beginning of Casablanca to a noble sacrifice of love at its end, is one of the most compelling plots in the history of cinema.  But after that, it is permissible to reflect on Casablanca’s \political content, just as film critics have been doing for over seventy years.
If you have never seen Casablanca, then stop reading this column, get hold of the DVD, and return after you’ve watched it.  The rest of us may reflect on the film as it would have appeared to movie goers who saw it during its initial run.  Casablanca debuted at New York’s Hollywood Theater on Thanksgiving Day 1942, not quite a year after the United States entered World War II.  By February 1943 it was playing in over 200 theaters across the country.
At one level, of course, Casablanca is indeed an extraordinary romance. It centers on Rick’s Café Americaine, whose clientele comes to drink, gamble, and attempt to buy and sell escape from Casablanca, in French Morocco, to Lisbon in neutral Portugal and departure to freedom in the New World.  (French Morocco was then under the control of Vichy France, the authoritarian, pro-German rump state established after France signed a humiliating armistice with Germany.)  Rick himself is hardened and bitter.  It transpires that Rick has come from Paris, where he loved and lost the beautiful Ilsa Lund (Ingrid Bergman).  Then Ilsa suddenly appears in the company of her seeming new lover, resistance leader Victor Laszlo (Paul Henreid).  “Of all the gin joints in all the towns in all the world,” Rick later glooms in a fog of liquor, “she walks into mine.”
Laszlo is among those trying to escape to Lisbon, closely pursued by the menacing Nazi Major Strasser (Conrad Veidt).  In Casablanca Laszlo enjoys a fragile safety, because it is under the jurisdiction of Vichy France.  But Vichy is after all virtually a German satellite, and sooner or later Strasser will find a way to seize him.  Laszlo is saved only because Rick ultimately decides to discard his cynicism and, in an intricately planned gambit, ensure Laszlo’s escape.
Few could miss Casablanca’s references to pre-war American foreign policy. Early in the film, Rick rebuffs an overture by the black marketeer Ferrari (Sidney Greenstreet) to go into business together.  “My dear Rick,” Ferrari chides, “when will you realize that in this world today isolationism is no longer a practical policy?”  Warned by the Vichy police prefect Captain Louis Renault (Claude Rains) not to intervene on behalf of the weasel-like Ugarte (Peter Lorre), who is correctly suspected of murdering two German couriers carrying letters of transit—priceless to anyone seeking to flee Casablanca—Rick responds, “I stick my neck out for nobody.”  Renault observes, “A wise foreign policy.”
Based upon those lines in the film, and its overall trajectory, some have theorized that Warner Brothers intended Casablanca as an argument in favor of American intervention in the war.  But that is an untenable interpretation.  Filming began only until May 1942, six months after Pearl Harbor, and when the cameras started rolling the script was still incomplete.  Working at white heat—screenwriter Howard Koch remembered feeling that “the camera was a monster devouring my pages faster than I could write them”—Koch scarcely had time to craft a subtle propaganda film.  And director Michael Curtiz scarcely had the intention:  he simply wanted to make a love story.
But as an affirmation of America’s goal in going to war, which was nothing less than to save the world from evil,  Casablanca had real power.  It is established early on that Rick once waged his own war against evil, running guns into Ethiopia and fighting in the Spanish Civil War, acts redolent of America’s intervention against Imperial Germany in World War I.  But like America, Rick retreated into a disillusioned isolationism:  “I stick my neck out for nobody.”
Yet despite Rick’s initial renunciation of  any intent to stick his neck out for Laszlo in Laszlo’s attempt to escape Strasser by flying to Lisbon with Ilsa (who turns out to be his wife),  by the end of the film Rick has done exactly that, notwithstanding the fact that Ilsa is the great love of his life.  “Welcome back to the fight,” Laszlo tells him.  “This time I know our side will win.”  To protect Laszlo and Ilsa from capture before the plane can lift off, Rick shoots Strasser.  Then, with the plane safely aloft, Rick—joined by Renault, who evidently has also recovered his idealism—walks off into the night to make his way to the Free French garrison at Brazzaville:  “Louis,” he says, in one of cinema’s great lines, “I think this is the beginning of a beautiful friendship.”  The arc of the film, then, is an unmistakable journey from isolationism to intervention.
But audiences would also have viewed Casablanca in more personal terms.  After explaining to Ilsa why he has decided that she should leave with Laszlo rather than remain with him, Rick continues, “I’m no good at being noble, but it doesn’t take much to see that the problems of three little people don’t amount to a hill of beans in this crazy world.”  Like Rick, millions of Americans were making a sacrifice on behalf of the greater good, either by leaving their loved ones to go to war or by watching their loved one depart.  And if by horrible chance the loved ones failed to re-unite, then, like Rick, they could yet console themselves with their own equivalent of Rick’s declaration to Ilsa:  “We’ll always have Paris.”