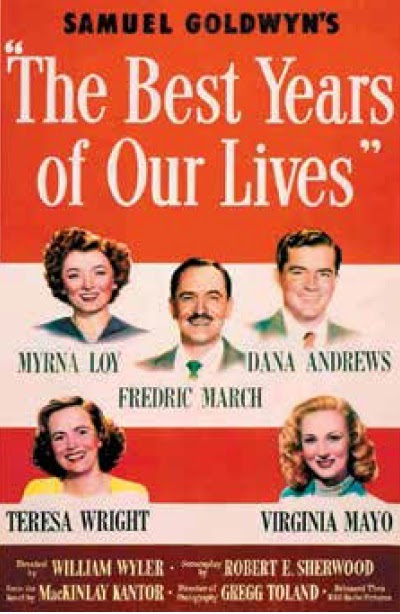 Starship Troopers and the Allure of Fascism 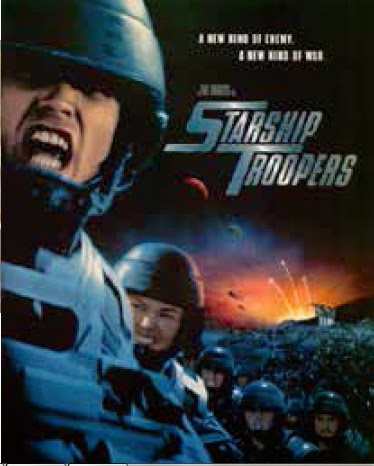 At first blush Starship Troopers appears to have only a superficial connection with World War II. In the 1997 film, transports carry elite troops across long distances to a hostile shore, where the troops clamber into landing craft that carry them into battle against an enemy who neither gives quarter nor surrenders. That sounds like the  U.S. Marine invasions of Tarawa and Iwo Jima. But Starship Troopers is set in the late 23rd century. The hostile shore is an enemy planet. And the enemy  are gigantic bugs.
However Starship Troopers contains many elements that smack strongly of fascism, the dominant Axis ideology. The very first scene shows hundreds of Mobile Infantry—the starship troopers—at attention in a stance identical to SS troopers at the Nuremberg rallies. Their uniforms closely resemble those of Nazi Germany and Fascist Italy. Much of the rhetoric sounds fascist, as when Sky Marshal Diennes (Bruce Gray) stands at a lectern in a scene that looks very much like Hitler addressing the Reichstag, and declares war on the Arachnids (the bugs) to an enthusiastic crowd: “We must…ensure that human civilization, not insect, dominates this galaxy now and always!”
Starship Troopers appears redolent of fascism because director Paul Verhoeven and screenwriter Edward Neumeier consciously set out to make a film about fascism. The idea originated with Neumeier, who had co-written Verhoeven’s earlier RoboCop (1987). Told by “liberal friends” that RoboCop was “fascist,” Neumeier reflected that action films are inherently fascist, so why not make one that made the connection explicit? The concept appealed to Verhoeven, perhaps because he had spent his early childhood in Nazi-occupied Holland. And Starship Troopers made a good vehicle for such an effort, based as it was upon a 1959 Robert Heinlein novel widely regarded as crypto-fascist.
The first shot in Starship Troopers is a visual quote from Triumph of the Will, German filmmaker Leni Riefenstahl’s 1935 Nazi propaganda masterpiece. A subsequent sequence introducing the main characters—Johnny Rico (Casper Van Dien), Carmen Ibañez (Denise Richards), and Dizzy Flores (Dina Meyers)—on their last day of high school also introduces the basic philosophy of their world. “This year in history, we talked about the failure of democracy….,” teacher Jean Rasczak (Michael Ironside) says. “We talked about the veterans, how they took control and imposed the stability that has lasted for generations since.” Disillusionment with democracy was one of the main attributes of fascism. In the film, only military veterans may vote: they are citizens, while non-veterans are merely “civilians.” Military service has so thoroughly indoctrinated the veterans that, for all practical purposes, the world government is a one-party police state.
The high school chums soon enlist, and when war with the Arachnids breaks out, they are in the thick of the fight. Rasczak, who has re-entered active duty, serves as the  platoon  leader of Mobile Infantrymen Rico and Flores, while overhead Ibañez pilots a starship . Rico, Flores, and Ibañez are gorgeous—the 23rd century equivalent of the ideal Aryan youth—and they enthusiastically embrace a worldview that accepts, indeed celebrates, life as violent struggle—another core fascism principle. Moreover, the protagonists willingly subordinate their individual identities to the State, another fascist tenet. As Italian dictator Benito Mussolini said, “There is no concept of the State which is not fundamentally a concept of life.”

The film also makes clear that the State controls the media. Frequent clips from the “Federal Network” supply exposition for the story, and illustrate how the society works. For example, in a triumph of order over the discredited liberal “coddling” of criminals, a man is accused of murder in the morning, convicted that afternoon, and executed—live on television—that evening. One could multiply the parallels between fascism and Starship Troopers almost indefinitely.
Verhoeven and Neumeier deliberately crafted Starship Troopers to make its worldview seem appealing. “I wanted to do something more than just a movie about giant bugs,” Verhoeven said in an interview. “I tried to seduce the audience to join [Starship Troopers’] society, but then ask, ‘What are you really joining up for?’” Some critics who got the satirical point nevertheless worried that a younger audience would not—that naïve viewers would embrace this fascist world, much as those of similar age did in the 1930s. Indeed, the film’s success in depicting the the allure of fascism is what makes it an aid to understanding World War II, for we have long been so appalled by fascism that it is difficult to see the mass appeal it once possessed.
Some critics, indeed, mistook Starship Troopers as a celebration of fascism. In the DVD commentary Verhoeven and Neumeier seemed a bit surprised that anyone could believe such a thing. But they reserved their main scorn for TIME magazine film critic Richard Schickel, who concluded his review of Starship Troopers with the words: “[W]e’re looking at a happily fascist world. Maybe that’s the movie’s final, deadpan joke. Maybe it’s saying that war inevitably makes fascists of us all. Or—best guess—maybe the filmmakers are so lost in their slambang visual effects that they don’t give a hoot about the movie’s scariest implications.” The filmmakers chuckled derisively at that because, of course, fascism was exactly the subject of the film. Moreover, they added, Schickel got its thesis exactly right: “War makes fascists of us all.” Thus, Starship Troopers does not just satirize fascism. It also warns about its continued allure in times of strife.
Posted by Mark Grimsley at 7:00 AM No comments:

The Hero's Adventure in Sands of Iwo Jima 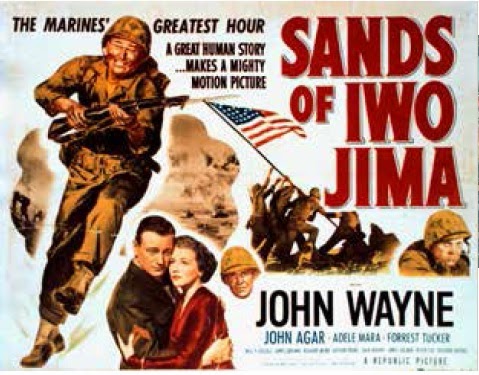 The next time you’re talking war movie trivia with friends, ask, “Who’s the hero in Sands of Iwo Jima?”  Almost inevitably, they will respond, “John Wayne.”  Or perhaps “Sergeant Stryker,” since that’s the name of the character that Wayne portrays.  But either way they will be wrong.  The hero is not Stryker, as one might expect because he is the film’s central figure.  It is instead the squad he leads into battle, and the story unfolds most richly when this is understood.

In everyday terms, anyone potentially can behave “heroically” in the sense of behaving courageously.  But in mythic terms, “Hero” has a specific meaning.  It refers to the character in a story who undergoes an adventure in which he is challenged and changed, and from which he returns with a “boon”; that is to say, something of lasting value for himself or for others.  Mythologist Joseph Campbell set forth this definition in a classic book, The Hero with a Thousand Faces, published in 1949 (the same year in which Sands of Iwo Jima debuted). Based on a study of cultures the world over, Campbell discovered that each had stories of a hero whose journey of adventure shared a common structure.

Although you may never have heard of Campbell’s book, you’ve surely seen its ideas on display, because when creating his Star Wars trilogy (1977-1983), writer/producer George Lucas consciously drew upon them.   The Hero (Luke Skywalker) leaves the “ordinary world” of the planet Tatooine, enters the “special world” of the adventure, learns how to function in this special world, fights an adversary (the Empire), reaches a point of maximum peril (the loss of a hand and of his friend, Han Solo, in The Empire Strikes Back), and finally defeats his adversary and brings the boon of enduring peace to the galaxy in Return of the Jedi.  But although Campbell was the first to identify this structure, story-tellers have unconsciously used it for millennia.  So it was with Sands of Iwo Jima, written by Harry Brown and James Edward Grant, and directed by Alan Dwan.

As Campbell makes clear, the Hero’s journey invariably contains certain standard archetypes, chief among them the Mentor, who teaches the Hero how to operate in the special world of the adventure.  In the Star Wars trilogy the Mentor is Obi Wan Kenobi.  In Sands of Iwo Jima it is Sergeant John M. Stryker.  Thus, the film opens in the “ordinary world” of a New Zealand training camp. The members of the squad—in mythic terms the Hero Team, because they embark on the adventure together—are the first to be introduced. Only then does Stryker appear.  His task is to prepare the Hero Team to enter the “special world” of combat.  He makes this plain when he and the squad first meet:  “If I can’t teach you one way, I’ll teach you another. But I’ll get the job done.”

Save for the two combat veterans in the squad, Stryker is not particularly well liked by the men.  Nor does he try to make himself likeable.  He even butt strokes PFC “Sky” Choynski (Hal Baylor), who cannot master the foot work involved with bayonet drill.  But true to his word, if Stryker can’t teach Choynski one way, he’ll teach him another, and later in the film he does so using the “Mexican Hat Dance” to give Choynski a sense of the rhythm and shifting of body weight involved.

Many adventures involve both a Mentor and a Shadow Mentor.  The latter tries to induce the Hero into embracing the dark side of the special world.  In the Star Wars trilogy the Shadow Mentor is Darth Vader. In Sands of Iwo Jima, Stryker represents both Mentor and Shadow Mentor.  Most of the squad see only the Mentor.  But one of them, PFC Peter Conway (John Agar) clearly perceives the Shadow Mentor, helped by the fact that he regards Stryker as the epitome of his own father, a flinty Marine colonel under whose command Stryker served on Guadalcanal.  Of his father, Conway speaks bitterly.  “I wasn’t tough enough for him. Too soft.  ‘No guts’ was the phrase he used. He wanted me to be like Stryker. . . . I bet they got along just fine.  Both with ramrods strapped on their backs. . . .They’re not going to strap one on mine.”  Conway views Stryker as the embodiment of man the violent animal as opposed to man the lover of life, family, and culture.
Conway encounters the Shadow Mentor most directly during the first night after the invasion of Tarawa.  This is the point of maximum peril for the Hero Team, for it has been assigned to hold a sector that ought to be defended by a force three times its size.  In the midst of this tense situation, Conway and Stryker hear the desperate cry of a wounded comrade.  Stryker refuses to help, saying that the cry may be a ruse and that an attempted rescue will give away the squad’s position.  To Conway this response is inhuman. “Sit here if you want,” he says, “I’m getting him. The only way you’ll stop me is to kill me.”  Stryker turns his rifle on Conway, his expression one of icy malevolence: “That’s just what I’ll do!”  Conway stays put.

Then, using Stryker’s trademark phrase, Conway steps forward to lead them. “All right, saddle up!” he growls. “Let’s get back in the war.” The squad has completed the Hero’s adventure.  But myth permits a nuanced reading of the film that leaves us wondering what individual journey Conway has completed.  Has he embraced Stryker as Mentor after all?  Or has he embraced the Shadow Mentor?  Perhaps, as Campbell once expressed it, Conway has “put aside his pride, his virtue, beauty and life” and has at last submitted “to the absolutely intolerable.”
Posted by Mark Grimsley at 2:20 PM No comments: