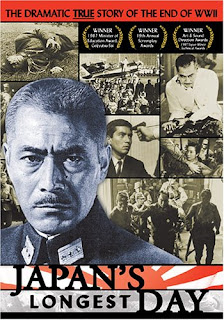 At noon on August 15, 1945, millions across Japan craned their ears to radios, listening in amazement to their emperor’s voice, reproduced on a 78-rpm phonograph record. Hirohito gravely read an imperial edict announcing that his government had acceded to the Allies’ demand that the Japanese military surrender unconditionally. In and of itself, this was a stunning moment. Most commoners had never heard an emperor speak. Hirohito delivered his remarks in a classical form of Japanese difficult for most of his countrymen to follow. He never used the words “defeat” or “surrender,” so many listeners did not grasp the meaning of his address. As previously authorized, an announcer afterward drove home the god-king’s stunning point. For the first time in its 2,500-year history, Japan had met defeat.

Twenty-two years later Toho Studio—which had won fans among American moviegoers with its Godzilla franchise—released Japan’s Longest Day, an account of the 24 hours that led to Hirohito’s radio broadcast. Directed by Kihachi Okamoto, a veteran of the Pacific War whose 40 films include many with World War II themes, Japan’s Longest Day—like The Longest Day, its 1962 Hollywood namesake—featured an all-star cast memorably led by Toshiro Mifune, Japan’s John Wayne. The film, closely based on fact, became Japan’s second highest grossing film of 1967, inspiring Toho to make other movies about the Japanese military during the Second World War. Japan’s Longest Day, little known in the United States, was almost unobtainable until 2006, when Wilmington, North Carolina, video distributor AnimEigo (animeigo.com) released an excellent DVD transfer.

The title refers to the gripping sequence of events between noon August 14, when Hirohito importuned his cabinet to end the war, and noon August 15, when Gyokuon-hōsō, “the Jewel Voice Broadcast,” signified the end of the Japanese empire.

In a 21-minute documentary-style open, Okamoto portrays the cabinet struggling to answer Potsdam Declaration demands for unconditional surrender, with the only alternative “prompt and utter destruction.” The cabinet splits. A pro-peace faction centers on Prime Minister Baron Kantaro Suzuki (Chishu Ryu). The diehards’ strongest voice is Japan’s war minister, General Korechika Anami (Mifune).  Reluctant at best to accept surrender, Anami argues that the Potsdam Declaration does not offer adequate assurance that the Allies will permit the emperor to the keep the throne,    The Cabinet, he insists, must force the Allies to be clear on this point. “Because if that is not the case,” the general tells the Cabinet, fist on the hilt of his long sword, “we must fight to the last man.”

Unable to decide even with Hiroshima and Nagasaki in radioactive cinders and the Soviets invading Manchuria, the cabinet finally meets with the emperor to seek resolution.  Suzuki and Anami each make their cases. As Hirohito (Hakuo Matsumoto) rises to respond, Okamoto superimposes a clock, then the film’s title. The documentary structure falls away and Japan’s Longest Day plays out as a drama inter-cutting the cabinet and emperor in their final deliberations, the push to record and broadcast the surrender edict, and hardcore militarists plotting to keep the speech from reaching the Japanese people.

“It is impossible to continue to prosecute this war,” Hirohito tells the cabinet, voice halting as he tries to control his emotions. “No matter what happens to me . . . my people . . . save my people.  I can no longer endure letting them suffer any longer.” Kihachi photographs this scene carefully, not revealing Hirohito’s face. Besides showing deference to the emperor, still on the throne at the time of the film’s release, this framing focuses our attention on Anami’s reaction to his sacred leader’s declaration. When the rest of the cabinet is bursting into tears, the dry-eyed Anami, who knows of the would-be coup, wears an expression of austere resignation. His heart is with the hard-core militarists, but to join the resistance would be to defy his emperor, and he is too much the man of tradition to do so.

Over the next two hours, characters race one another and time. The cabinet wrangles over the language of the edict the emperor will sign and record for broadcast. A cadre of staff-level officers deduces what is underway and plots a coup d’état. Commanders at two key air bases, Atsugi and Kodama, vow to fight on by sending kamikazes against an American fleet off the coast. Anami, after sternly instructing his staff to obey the emperor’s will, goes into foreboding seclusion.

Okamoto’s juxtapositions can be startling. Civilians, including many schoolchildren, throng an airfield to sing an anthem of support for pilots preparing to fly to their deaths. The song continues as the perspective cuts to officials placing the finished edict before the emperor, who signs it. The recording session takes place; the emperor’s men hide the disk at the Imperial Household Agency. The plotters invoke the impending kamikaze attacks as they plead with General Takeshi Mori (Shogo Shimada), commander of the Imperial Guard Division, to join their coup. Rebuffed, the conspirators murder Mori, forge orders in his name, and transmit them to the empire’s remaining forces. Imperial Guard detachments surround the palace and ransack the royal household looking for Hirohito’s surrender recording.

The coup begins to fall apart. The guardsmen cannot find the record. The forged orders’ origins come to light. General Shizuichi Tanaka (Kenjiro Ishiyama), commander of the Eastern District Army, arrives at the palace to stop the plot for good. In counterpoint, Anami, alone but for two young subordinates, resolutely prepares to commit seppuku—self-disembowelment. He tells his companions, who are there to witness his suicide, that they must help to rebuild Japan. “Each and every Japanese must stand by their station, live on, and work earnestly,” Anami urges the pair. “In no other way can the nation be rebuilt.”

Anami kills himself. Separately, so do the plotters, whose bodies are on screen as we hear the announcer’s voice introducing the emperor’s recording. Japan’s Longest Day ends not with an outright rejection of militarism—70 years on, Japan has yet to come to terms with what its aggression wrought—but with the suggestion that for a new Japan to rise the old Japan had to die.
Posted by Mark Grimsley at 6:10 AM