I'll introduce this post by re-printing one I published earlier this month in Civil Warriors, entitled, Civil War Military Historians Are Freaking Out? - Part 1:

Both articles depict, to varying degrees, the increasing marginalization of traditional military history (strategy, operations, tactics, etc.) within academe.  Actually, I would place the word “seemingly” immediately before the word “increasing.” But I’ll explain that in a future post.  For now, I’d just like to call attention to the response to these two pieces by Historista, the nom de blog of Megan Kate Nelson, author of Ruin Nation:  Destruction and the American Civil War (2012), which, according to the description on the back of the soft cover edition, is “the first book to bring together environmental and cultural histories to consider the evocative power of ruination [that is to say, the destruction of cities, houses, forests and soldiers’ bodies] as an imagined state, an act of destruction, and a process of change.”  Which is to say, one of the books forming part of the phenomenon that is causing Civil War military historians to freak out.

Her post, entitled “Civil War Military Historians Are Freaking Out,” appeared on her blog on December 10, 2014.  I self-identify as a military historian, and I’m freaking out so badly that I assigned Ruin Nation as a supplemental text in an undergraduate readings course I taught last summer and as a required book in my upcoming graduate readings course (it starts next week).

For now, I simply refer you to the post, with comment to come on the articles that prompted it:


Let’s imagine that you wake up one morning after many years of writing and speaking and teaching in your academic specialty. You have tenure, you have written a lot of books and articles and book reviews, and colleagues across the profession (and sometimes, complete strangers) know who you are. But you wake up one morning convinced that it has all been for nothing. Nobody cares anymore about your research topic or your methodologies or your arguments. You wake up and think, “Oh my god! My field is dying."

So what do you do?


Find out by reading Civil War Military Historians Are Freaking Out
***

Over the holiday break, the staff of Civil War History compiled a list of online blogs and articles that relate (both directly and more indirectly) to the think piece by Earl Hess. The staff has shared the list on the CWH Facebook page  "in hopes that it continues to inspire a thoughtful and productive dialogue."  With that hope in mind, here's the list as they have it thus far (leaving aside the link to my own post, reprinted above):

Kevin Levin, Civil War Memory, What Do We Need to Know About Traditional Military History? (December 7, 2014)

Claire Potter, Tenured Radical, And the Dead (Fields of History) Shall Rise Up (December 11, 2014)

Kevin Gannon, The Tattooed Professor,  Taking a Walk on the Civil War’s "Dark Side" (January 6, 2015)

(NB.  Actually, it's no longer accurate to refer to the "blogosphere," at least not as a self-contained entity, because when links to posts are shared on Facebook or Twitter (as they frequently are), most of the ensuing dialog takes place on those sites, especially FB.  The update on the Civil War History Journal Facebook page is itself a case in point.  The resulting dynamic is worth a post in its own right--something I'll have to place on my long list of things to blog about.  In the interim, it's time to write part 2 of  my own response.)
Posted by Mark Grimsley at 2:44 PM 2 comments:

The Role of Military History in the Contemporary Academy

Cross-posted from the Society for Military History blog


co-authors Tami Davis Biddle of the U.S. Army War College and Robert M. Citino of the University of North Texas provide a compelling chronicle of military history’s revitalization over the past four decades and assess its current place in American higher education. In addition to the sub-field’s maturation in academic terms, its enduring popularity with the public and college students makes it an ideal lure for history departments concerned about course enrollments and the recruitment of majors and minors. Knowledge of the uses, abuses, and costs of war should also constitute a part of the education of future leaders in the world’s mightiest military power.
The SMH intends this white paper to generate a dialogue with history professors, college and university administrators, journalists, politicians, and citizens regarding the key role the study of military history can play in deepening our understanding of the world we inhabit and producing an informed citizenry.

The white paper is available here. (It can be read online or downloaded in PDF format.)
Posted by Mark Grimsley at 12:58 AM 3 comments: 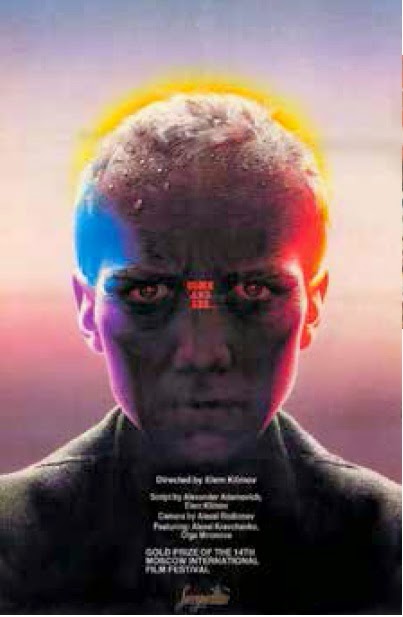 In his classic 1959 book, The Warriors: Reflections on Men and Battle, philosopher and World War II veteran J. Glenn Gray observed that war is visually fascinating. Renowned director François Truffaut expanded on this thought, arguing that it was impossible to make an effective anti-war movie because war by its nature is exciting, especially to the eye. Come and See, a 1985 film directed by Elem Klimov in the Soviet Union, defies Truffaut’s dictum.
The film’s title comes from the Book of Revelation: “. . . And when he had opened the fourth seal, I heard the voice of the fourth beast say, Come and see. And I looked, and behold a pale horse: and his name that sat on him was Death, and Hell followed with him. And power was given unto them over the fourth part of the earth, to kill with sword, and with hunger, and with death, and with the beasts of the earth.”

Klimov asks, in effect, that we come and see an apocalyptic vision play out in a backwater of Nazi-occupied Belorussia, now Belarus, where forests, fields, and hamlets constitute a hell as vivid as the one Dante Alighieri portrayed in his Inferno. He succeeds, paradoxically, because he assumes no moral position but rather observes, with eyes wide open, his characters and the nightmare world in which he has placed them.
As the film begins an old man is calling to figures out of frame revealed to be two boys of 14 or so. The youths are digging in loose soil to retrieve weapons; they mean to sign up with a partisan band. The old man tries to discourage them, but the boys ignore him, and a few days later enlist.
From this point the film  follows Florya (Aleksei Kravchenko), who has joined the resistance to take action but instead is mostly acted upon. As the partisans depart on a mission, a man with tattered footwear appropriates Florya’s boots. The fighters order the boy to remain in camp, together with Glafira (Olga Moronova), a girl not much older than he. The two spend much of the film together, as companions rather than friends. They leave camp to wander a largely empty landscape, trying to avoid dangers both elusive and omnipresent. Florya suggests they go to the hovel where his mother and siblings live. No one is there, but a warm meal is in the oven. Flies are buzzing. The boy and girl begin to eat, nearly oblivious to the insects..
Florya decides his family has gone into hiding, and races from the hut, followed by  Glafira follow.  Glancing over her shoulder,  she sees the source of the flies: piled against the dwelling are dozens of naked corpses, surely including Florya’s family. Glafira keeps this information to herself as they wade through a waist-deep bog to the island where the boy imagines his family to be. Finally, drenched in mud and reeking water, the girl cannot contain herself.

“No, they aren’t here! she screams.  “They’re dead!”  A furious Florya briefly tries to strangle her.  Then one of the resistance fighters appears; he takes the youngsters to a spot where refugees and partisans stand intermingled.  In the midst of them, lying on his back, is the man who at the film’s outset told Florya and his friend to stop digging. Third degree burns cover the old man’s body; he is dying. The Nazi patrol that slaughtered the civilians set him on fire as a lark.“Florya,” he says, “didn’t I warn you?  Didn’t I tell you not to dig?” In that moment Florya finally accepts the deaths of his mother and siblings.

The horror of that moment is oddly intensified by the obvious indifference of the partisans, one of whom has placed a skull atop a scarecrow-like torso and laughingly applies clay to it, sculpting a facsimile of Hitler’s head.
Indifference is, indeed, central to Come and See.  Klimov wanted to produce a film with devastating impact, and he succeeded; Come and See is widely admired as a masterpiece.  But the method by which he achieves this impact is a studied indifference. The camera impassively regards characters and situations. The editing never calls attention to agony, atrocity, or terror. The soundtrack, understated and monotonously ominous, conveys neither empathy nor antipathy.
A viewer may see good and evil, but every element in the film conspires to deny that good and evil exist. There is a  harrowing sequence in which Germans—who with one minor exception do not appear until 90 minutes into the two-and-a-half hour film—round up Florya and the population of a village and crowd them into a barn.  An SS officer says that those without children can leave through a window, but the children must stay.  No one accepts the cruel offer except Florya, although moments later a young mother attempts to leave with her toddler.   The soldiers toss the toddler back through a window, drag the woman off by her hair, and set the structure  on fire.. As the villagers begin to scream, the soldiers applaud. For a full 10 minutes the camera holds on the barn and the sheets of flame consuming it, cutting away only to show one group of soldiers carrying off the terrified young mother to be raped, while another forces Florya to his knees and places a pistol against his temple—not to kill him, but to use him as a prop for a jovial group snapshot.
In its closing moments the film does at last adopt a moral position.  The camera shows justice meted out.  The sound track, hitherto so muted, swells in tragedy.  The partisans seem somehow noble rather than wretched.  And Florya, so ineffectual through much of the film, suddenly performs an act of stunning power—yet one that occurs only symbolically.  There is no redemption from what we have seen.
“The spirit gone, man is garbage,” wrote Joseph Heller in Catch-22.  In war, Come and See declares,  the living are garbage, too.
Posted by Mark Grimsley at 7:00 AM No comments:


Diary of a Sergeant (1945)  22 minutes, 14 seconds. Produced by the Army Pictorial Service, US Army Signal Corps

This is the training film in which director William Wyler discovered Harold Russell, whom Wyler would cast as Homer Parrish in The Best Years of Our Lives..  A number of amputees are in the film.  Russell’s the first amputee to appear, with his double amputation prominently displayed.  He is the ostensible narrator of the film, although someone else actually provides the narration. Early in the film it’s disclosed that his character lost his hands on June 6, 1944--but in a training accident, not on the beaches of Normandy.
Posted by Mark Grimsley at 7:00 AM No comments: