Yes, Virginia, You Can Try a Former President 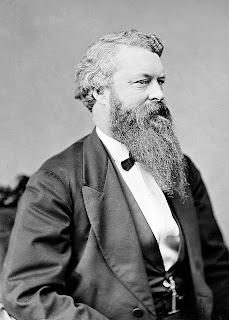 That's William W. Belknap in the photo. And his story has much to say about whether it's constitutional to impeach Trump now that he has left office?  The short answer is: Yep.
To begin with, the House of Representatives *impeached* him before he left office.  It's only the required Senate trial that's taking place after he's left office.
As for *trying* him after he has left office, there's historical precedent for impeaching and trying a federal official after they have left office.  You've got an uphill climb if you want to argue that trying Trump is unconstitutional.  You certainly cannot say, as the GOP has done, that it's unconstitutional on its face.
On January 15 the Congressional Research Service  (CRS) produced a report entitled "The Impeachment and Trial of a Former President," that explores the history of impeachment in the United States, and notes that federal officials have been impeached after they have left office.  In other words, it has been regarded as constitutional.
The CRS is a  public policy research institute created by Congress in 1914.  Like the Congressional Budget Office and the General Accountability Office, it works directly for Members of Congress on a bipartisan basis.
The report points out that federal officials have been impeached and tried after they have left office.
The most notable case involved the impeachment of Secretary of War William Belknap in 1876, essentially on grounds of rampant corruption.  Here's what the U.S. Senate Historical Office says about it:

On March 2, 1876, just minutes before the House of Representatives was scheduled to vote on articles of impeachment, Belknap raced to the White House, handed Grant his resignation, and burst into tears.
This failed to stop the House. Later that day, members voted unanimously to send the Senate five articles of impeachment, charging Belknap with "criminally disregarding his duty as Secretary of War and basely prostituting his high office to his lust for private gain."
The Senate convened its trial in early April, with Belknap present, after agreeing that it retained impeachment jurisdiction over former government officials. During May, the Senate heard more than 40 witnesses, as House managers argued that Belknap should not be allowed to escape from justice simply by resigning his office.
On August 1, 1876, the Senate rendered a majority vote against Belknap on all five articles. As each vote fell short of the necessary two-thirds, however, he won acquittal.

Republicans undoubtedly know about this precedent.  They rely on the fact that the American public does not know about it.
Posted by Mark Grimsley at 5:06 AM No comments: 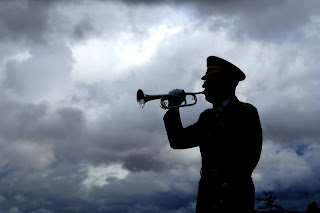 Yet another lament for the supposed demise of academic military history has appeared, this time from the pen of the distinguished military historian Max Hastings.  These op-eds appear every few years, apparently oblivious to the ones that preceded it and the pushback they received from military historians like myself.  My own commentary focused mainly on an op-ed by John J. Miller in National Review Online September 2006.  Since it appears to have disappeared from the Internet, I reprint it here.

EDUCATION 2006 [September 26, 2006]
Sounding Taps
Why military history is being retired

A decade ago, best-selling author Stephen Ambrose donated $250,000 to the University of Wisconsin, his alma mater, to endow a professorship in American military history. A few months later, he gave another $250,000. Until his death in 2002, he badgered friends and others to contribute additional funds. Today, more than $1 million sits in a special university account for the Ambrose-Heseltine Chair in American History, named after its main benefactor and the long-dead professor who trained him.

The chair remains vacant, however, and Wisconsin is not currently trying to fill it. “We won’t search for a candidate this school year,” says John Cooper, a history professor. “But we’re committed to doing it eventually.” The ostensible reason for the delay is that the university wants to raise even more money, so that it can attract a top-notch senior scholar. There may be another factor as well: Wisconsin doesn’t actually want a military historian on its faculty. It hasn’t had one since 1992, when Edward M. Coffman retired. “His survey course on U.S. military history used to overflow with students,” says Richard Zeitlin, one of Coffman’s former graduate teaching assistants. “It was one of the most popular courses on campus.” Since Coffman left, however, it has been taught only a couple of times, and never by a member of the permanent faculty.

One of these years, perhaps Wisconsin really will get around to hiring a professor for the Ambrose-Heseltine chair — but right now, for all intents and purposes, military history in Madison is dead. It’s dead at many other top colleges and universities as well. Where it isn’t dead and buried, it’s either dying or under siege. Although military history remains incredibly popular among students who fill lecture halls to learn about Saratoga and Iwo Jima and among readers who buy piles of books on Gettysburg and D-Day, on campus it’s making a last stand against the shock troops of political correctness. “Pretty soon, it may become virtually impossible to find military-history professors who study war with the aim of understanding why one side won and the other side lost,” says Frederick Kagan, a resident scholar at the American Enterprise Institute who taught at West Point for ten years. That’s bad news not only for those with direct ties to this academic sub-discipline, but also for Americans generally, who may find that their collective understanding of past military operations falls short of what the war-torn present demands.

The very first histories ever written were military histories. Herodotus described the Greek wars with Persia, and Thucydides chronicled the Peloponnesian War. “It will be enough for me,” wrote Thucydides nearly 25 centuries ago, “if these words of mine are judged useful by those who want to understand clearly the events which happened in the past and which (human nature being what it is) will, at some time or other and in much the same ways, be repeated in the future.” The Marine Corps certainly thinks Thucydides is useful: He appears on a recommended-reading list for officers. One of the most important lessons he teaches is that war is an aspect of human existence that can’t be wished away, no matter how hard the lotus-eaters try.

A DYING BREED
Although the keenest students of military history have often been soldiers, the subject isn’t only for them. “I don’t believe it is possible to treat military history as something entirely apart from the general national history,” said Theodore Roosevelt to the American Historical Association in 1912. For most students, that’s how military history was taught — as a key part of a larger narrative. After the Second World War, however, the field boomed as veterans streamed into higher education as both students and professors. A general increase in the size of faculties allowed for new approaches, and the onset of the Cold War kept everybody’s mind focused on the problem of armed conflict.

Read more »
Posted by Mark Grimsley at 12:47 PM No comments: