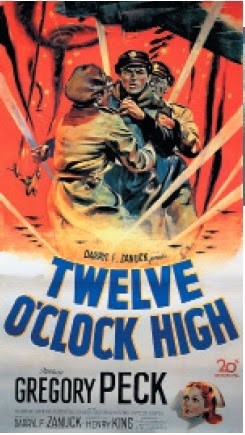 Twelve O’Clock High, a justly celebrated film about the air war over Europe, shows barely any high-altitude violence. Even so, director Henry King and his actors expertly illuminate the complex burdens of commanding personnel engaged in the brutal grind of flying into combat repeatedly as the odds of survival shorten. The portrait they render of men under pressure achieves a timeless, unblinking clarity.

This is why, more than 60 years after its 1949 premiere, military educators still employ Twelve O’Clock High to talk about leadership. These conversations usually address such practicalities as command style, but the film offers insights on many other levels. During two years as a visiting professor at the U.S. Army War College, I showed my students—mostly colonels fresh from Afghanistan and Iraq— a key scene from the film in order to make them to think and talk about how the ethical reasoning in its imaginary world informs real-world officership.
Twelve O’Clock High begins with the fictional 918th Bomb Group returning from a disastrous raid against German submarine pens in St. Nazaire, only to have Bomber Command order a low-altitude run at the pens the very next day. Group commander Colonel Keith Davenport (Gary Merrill) protests to Brigadier General Frank Savage (Gregory Peck). “Those boys are flesh and blood. They’ll die for you but they gotta know they have a chance and they know they haven’t got one,” Davenport says. “They know a man’s chances run out in 15 missions. Somebody’s gotta give them a limit. A goal, some hope of living.” Savage reluctantly conveys Davenport’s misgivings to their superior, Major General Pritchard (Millard Mitchell), who with Savage confronts Davenport, an otherwise unimpeachable officer.

Here is where the film’s moral world comes into focus. The three officers, in the company of other men of the 918th, discuss the deadly mission, whose heavy losses they trace to a navigational error. Davenport tries to shield the man who made that mistake, but the mission’s navigator, Lieutenant Zimmerman (Lee MacGregor), steps forward. He forthrightly explains how his errors brought the 918th late to the target and into German anti-aircraft gunners’ sights. As soon as Zimmerman is out of earshot, Pritchard pressures Davenport to relieve him. Davenport refuses. Pritchard relieves Davenport, ultimately replacing him with Savage. Within hours, Zimmerman, off-camera, commits suicide.