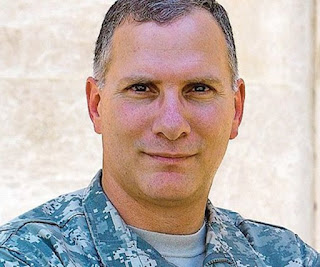 My friend and colleague Pete Mansoor, a retired Army colonel, has just completed a series of interviews with CNN, MSNBC, and other outlets. Pete is a life-long Republican. In all of of these interviews he goes on record to state that not only does he regard Donald Trump as unacceptable as a commander in chief, he will vote instead for Hillary Clinton.

Pete's qualifications as a military analyst could hardly be stronger.

Pete isn't simply a retired colonel, he graduated first in class at West Point,  commanded a brigade in Iraq, served as the founding director of the U.S. Army/Marine Corps Counterinsurgency Center at Fort Leavenworth, Kansas. There he helped to edit FM 3-24 Counterinsurgency, published in 2006, which was used to reshape the conduct of the Iraq War.

In the fall of 2006 he served on the so-called "Council of Colonels," a task force of senior officers created by the Joint Chiefs of Staff that reexamined the strategy for the war in Iraq.

The capstone of his 30-year career was as Gen. David Petraeus' executive officer in Iraq during the 2007-2008 Surge.

Pete, a fellow in the Council of Foreign Relations, currently holds the Raymond E. Mason Professor Chair of Military History at The Ohio State University, where his duties divide equally between service to Ohio State's Mershon Center for International Security Studies and teaching in OSU's Department of History.

He is the author of three books, two of which--Baghdad at Sunrise:  A Brigade Commander's Experience in Iraq and Surge: My Journey with General David Petraeus and the Remaking of the Iraq War--recount his experiences in the Iraq War.

With all these qualifications--as well as Pete's quick, sharp mind and ability to present his views lucidly, forcefully, and concisely-it's no wonder that he's a much sought after figure for media interviews.


He is also one of 100 national security analysts who came out in opposition to the Trump candidacy in March.

As I can attest from numerous discussions with him, Pete is a die-hard Republican with a formidable ability to articulate the Republican political philosophy.  When he decided that he had to reject the GOP presidential nominee in favor of Hillary Clinton, hell did not exactly freeze over, but a skin of ice had definitely formed.

Here is Pete's interview with Chris Hayes's All In on MSNBC. He has made similar statements on  other venues, notably CNN's Anderson Cooper 360:

Posted by Mark Grimsley at 7:33 AM