Pulp Nonfiction and The Big Red One 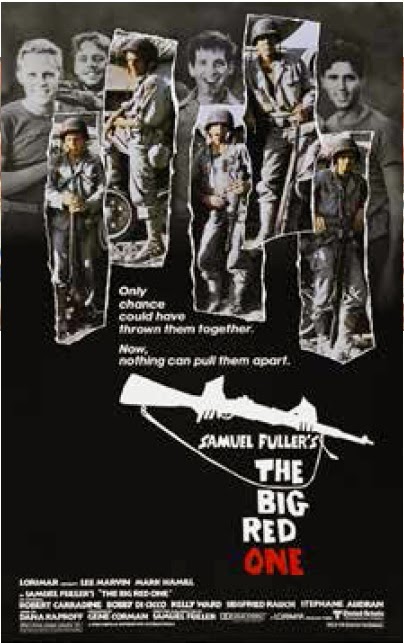 
Released in 1980, The Big Red One tells the story of a squad leader and four privates fighting in every World War II campaign involving the U.S. 1st Infantry Division, whose nickname gives the film its title. These men are not the squad’s only members; they’re just the ones who survive. The rest are simply replacements, who look upon the veteran privates—“the Four Horsemen,” they’re called—with awe: How on earth do these men repeatedly escape death? For their part, the Horsemen regard replacements as “dead men who temporarily had the use of their arms and legs.” Replacements come and go so fast the Horsemen learn to keep them at a distance. A joke that runs through the film is that even after months of training alongside fellow soldiers none of the quartet has bothered to learn their names.
Lee Marvin plays the squad leader, known simply as The Sergeant. He is a veteran of World War I, grizzled, taciturn, and utterly realistic. The Horsemen are played by Mark Hamill—yes, that Mark Hamill—Bobby Di Cicco, Kelly Ward, and Robert Carradine. In this ensemble effort Carradine’s character, Zab, ranks first among equals and has the most developed role—unsurprising, since Zab, who provides a voiceover narration, stands in for Samuel Fuller, the man who lovingly wrote and directed The Big Red One.
Sam Fuller (1912-1997) himself fought in The Big Red One. A precocious writer, he was covering crime for the New York Evening Graphic in his teens and as a young man scripted B movies. He said he joined the Army because “I had a helluva opportunity to cover the biggest crime story of the century, and nothing was going to stop me from being an eyewitness.” Superiors tried twice to make him an official army reporter, but he insisted on serving in the infantry. Like alter ego Zab, Fuller published a mystery novel at the height of the fighting, sold the film rights to Hollywood, and spent a thousand dollars of the proceeds on a party for his squad days before the Battle of the Bulge. Like Zab, Fuller chomped cigars and did everything possible to make himself seem larger than life. And like Zab, he got through the war in one piece.
Fuller went on to become a Hollywood director whose 23 films have a deserved reputation for combining gritty realism and vivid characters with unabashed melodrama. During his life Fuller won little critical acclaim, but he influenced directors who became masters, including Martin Scorsese (Taxi Driver, GoodFellas) and Quentin Tarantino (Pulp Fiction, Inglourious Basterds).
Fuller spent years trying to get The Big Red One financed. When he did, the studio, horrified by his film’s 4-1/2 hour length, demanded edits that reduced the running time to 113 minutes. Fuller initially claimed to be glad the movie had been produced at all, but subsequently expressed regret that the public had not seen the movie he had imagined. His friend and admirer, film critic Richard Schickel, felt the same. After Fuller’s death Schickel supervised a “reconstruction” of The Big Red One, incorporating 50 minutes of footage the studio had cut. Upon the expanded version’s release in 2004, Pulitzer-prize winning critic Roger Ebert promptly placed it on his list of Great Movies.
The Big Red One isn’t merely based on Fuller’s wartime experiences. It pretty much recounts them—something that becomes obvious if you read his memoir, A Third Face, published posthumously in 2002. Even the least likely episodes turn out to dramatize events that really occurred: the private in Sicily who has a testicle blown off and is told that that’s why the good Lord gave him two, the raid on a Belgian insane asylum, the underage civilian sniper who when captured isn’t shot but spanked, the liberation of a concentration camp. Zab’s narration is pure Fuller, as when the Horseman explains an explosive device used to clear concertina wire on Omaha Beach. “The Bangalore torpedo was 50 feet long and packed with 85 pounds of TNT and you assembled it along the way, by hand,” Zab says. “I’d love to meet the asshole who invented it.”
Almost none of the film’s incidents build upon one another, but instead stand as deliberately unrelated vignettes. Fuller maintained that that is the combat soldier’s life: a string of vivid episodes, full of sound and fury signifying nothing. Thus he could place a firefight in a Roman amphitheater without invoking gladiators, as many another filmmaker might. In a heavy-handed scene, a battle is under way in an insane asylum when an inmate grabs a submachine gun. “I am one of you!” the madman shouts as he indiscriminately sprays bullets. “I am sane! I am sane!” This would be the clumsiest kind of symbolism—except that Fuller was recreating a wartime incident he witnessed and in his memoir even supplies the patient’s name.
At the conclusion, Zab conveys the picture’s moral: “Surviving is the only glory in war.”  This makes The Big Red One sound like an anti-war film. It isn’t. Fuller plainly regarded World War II as a great adventure, and his mindset seeps into The Big Red One, lending the film a seductive appeal. The focus on Zab and his comrades tempts the viewer to identify with the Four Horsemen, to imagine participating in the adventure and coming away unscathed. It’s easy to forget that in combat, a soldier’s fate is likelier to be that of a replacement.
Posted by Mark Grimsley at 7:00 AM